This article appeared in the October 1970 issue of Karate Illustrated it is a comparison of the effectiveness of Karate and Jeet Kune Do punching. Bruce Lee cooperated with Hayward Nishioka in the compiling of this article

POWER IN THE PUNCH
by Hayward Nishioka 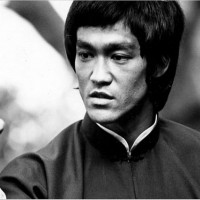 “Hit this glove with a Karate strike,” Bruce Lee of jeet kune do said to Mel Yoshioka of Shotokan Karate.

“Hmmmm, not bad.” Bruce told him as he took off the Karate stiking glove and handed it to Mel. “this time you put it on and hold while I strike it.”

“Krack! ” Mel’s arm was flung back, twisting the upper part of his torso in an 180 degree turn. “Wow! What happened? “How can a punch carry so much force?” Exclaimed Mel.             As anyone knows in the martial arts, there is a right way and a wrong way to execute a technique. In order to gain maximum efficiency in a punch, there are certain principles that should be followed and an understanding of the physical anatomy of a punch is helpful in making it as effective as possible. The body mechanisms for movement are bones and muscles. The bones are moved by an estimated 270 million striated muscles. There are certain muscle groups that should be utilized to attain maximum impact in the punch and there are cert             muscles that should be relaxed to aid this process. The timing of the use of these muscles determines the ty       of motion which results.

The lifting of one’s arm seems like it is very easy and is an everyday occurrence. The repetition and constant use in specified movement patterns make it possible for us to lift our arms without having to give the action a second thought. When taking a closer look, however, we· find that the muscles are responsible for moving the bones. For our purpose we will classify these muscles into two groups; ‘agonists’: those muscles which perform the desired action and ‘antagonists’: those muscles that may hinder the desired action. For example the biceps are muscles that are primarily used in pulling. The action of the triceps is that of pushing. When pushing an object, the desired action is to force the object away. Therefore the triceps become the agonists and the biceps become the potential antagonists. In pulling the opposite is true. The biceps become the agonists and the triceps become the potential antagonists. Each of the three joints and the three joints and the three muscles have agonists.

Concentric contraction, according to ‘Kinesiology and Applied Anatomy’ by Rasch and Burch, is “when a muscle develops tension sufficient to overcome a resistance, so that the muscle visibly shortens and moves a part of the body in spite of a given resistance.”

Eccentric contraction, according to the same author, occurs “when a given resistance overcomes the muscle tension so that the muscle actually lengthens.”

The Karate strike utilized both agonistic and antagonistic muscles in punching, thereby neutralizing the effectiveness of the impact upon the punching glove. Most of the antagonistic muscles contracted eccentrically in the karate punch. the latissimus dorsi, trapezius II and Ill, and the biceps brachii and brachialis all showed tension long before impact.

JKD, on the other hand, showed less eccentric contraction of the antagonistic muscles before impact. JKD utilized ballistic (propelling the fist a maximum speed) type movement to impart maximum force. It was observed however that JKD did contract muscles concentrically and eccentrically on both the agonistic and antagonist muscles at the point of impact.

Although JKD proved more effective in striking power, the karate type of punch was more effective as a mean of exercise and physical development as more muscle mass was being used.

As an Amazon Associate, SKA earns from qualifying purchases